Hermes is a rustic God, a truly rustic God. This is not a familiar image of Him. Those sides of His character that most often receive homage these days concern speed, communication, commerce—hardly surprising, considering all these areas accord well with modern life and its preoccupations. Yet I would argue that Hermes’ equally widespread image is that of a pastoral God, particularly evidenced by His epithet Kriophoros, “Ram-Bearer.” This is by no means the only evidence pertaining to His concern with herding and pastorialism. His other epithets Epimelios (“Keeper of the Flocks”), Nomios (“Herder”) and Oiopolos (“Shepherd”) also speak to this. In Hesiod, He and Hekate “swell the produce, and the driven herds of cattle, and the wide-ranging goat flocks, and the flocks of deep-fleeced sheep” (1). According to Homer, He bestows his favor upon beloved mortals by multiplying their herds (2). Yet it is under His moniker of Kriophoros that Hermes appears frequently across the religious landscape of mainland Hellas.

Pausanias, that Roman-Greek travel writer to whom we owe much of our knowledge of the ancient Hellenic religious landscape, mentions a number of centers of Hermes’ worship specifically as the Ram-Bearer. Tanagra in Boiotia (just to the northwest of Athens and Attika) stands out for the plague Hermes averted by carrying a ram around the city’s walls. A cult statue by Kalamis depicted the God with the ram across His shoulders. This feat was commemorated during Tanagra’s local festival, the Hermaia, when the most beautiful youth would be selected to make the same circuit around the city wall while carrying a lamb (3).

Messenia in the southern Peloponnese, just to the west of Sparta, is also mentioned by Pausanias as honoring Hermes Kriophoros in a joint cult with Apollon Karneios (4). Most tantalizing, though, is this comment he throws out while describing the God’s cult in Korinth: “The story told at the mysteries of the Mother [Demeter] about Hermes and the ram I know but do not relate” (5).

Arkadia, however, is surely the region most connected to Hermes and especially to Hermes Carrying-the-Ram (6). Here is the God’s birthplace on Mt. Kyllene, as celebrated in the Homeric Hymns. The Arkadian identity was steadfastly tied to sheep and pastorialism generally. (This identity, translated in a poetic motif, would survive throughout antiquity and into the pre-modern era.) The Arkadians also had a brisk Archaic industry in small-scale bronze statues depicting themselves as a votaries clad in loose tunics, sturdy boots, petasoi and cloaks. These little shepherds present offerings of their livestock to their favorite hometown God, Who is shown in the same gear—broad-brimmed hat, boots (characteristically winged), tunic—and carrying a ram as befits this epithet (Figure 1). The popularity of these images was enough to inspire imitation: one of the most well-known surviving statues of Hermes Kriophoros (Figure 2) comes from Sikyon, home of a rival industry in bronze statues (7). 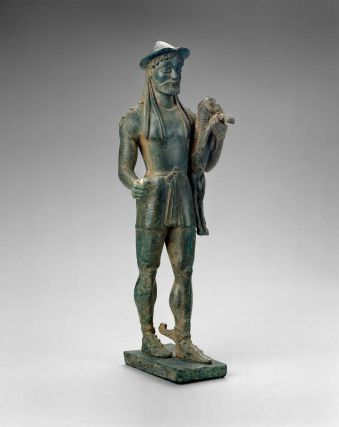 Depictions of Hermes with a ram or sheep crop up in a surprising number of places. He chills out with a drink on the back of one (Figure 3), or cradles another (Figure 4). Among all these images, Hermes is frequently bearded. This is not the smooth-faced youth of the Parthenon frieze and Classical vases but an ancient, potent, terrestrial deity close to the shared experience of the common Hellene. That Archaic smile bracketed by whiskers greeted every passerby as the herms dotting the country and city also: another marker of this God’s deep roots. Hermes at the Apotheosis of Herakles, name vase of the Sosias Painter, c. 500 BCE, Antikenmuseen, Berlin.

(But not always. One terracotta statue [Figure 5] from Thebes in Boiotia, dated to the beginning of the Classical period, shows the God with his familiar cloak, hat and ram tucked under an arm, but also with a smooth face. It is noteworthy that Tanagra, Thebes’ neighbor in Boiotia, also depicted Hermes Kriophoros without a beard, if we can trust Pausanias’ description and the Roman coins as showing Kalamis’ statue [Figure 6].) Even after Hermes shaved His beard, His connection to pastorialism and sheep endured. In fact, this image was so enduring as to later find a new incarnation when the early Christians appropriated it as their Good Shepherd (8). Yep, Hermes is the original Good Shepherd! The earliest surviving image using this iconography is from the catacomb of St. Callixtus, whose ceiling with the Good Shepherd is dated 250 to 275 CE (Figure 7). The humble, down-to-earthiness of this aspect of the God was appealing to the as-yet-unrecognized fledgling cult of Christ (9). For Late Antique pagans, the bucolic-idyllic associations of the shepherd expressed good hopes for the afterlife, and its representation of philanthropy would be the bridge between pagan and Christian symbolism (10)(11). 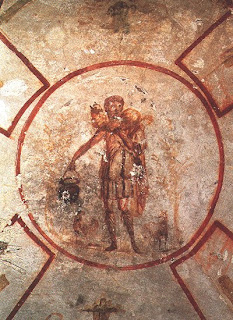 It would seem then that Hermes’ aspect as Kriophoros was, at least on the Greek mainland, as widespread as Hermes, the Olympian God of roadways, the marketplace and heralds. (If you think about it, this isn’t all that surprising, considering how important sheep and their products were to the ancient Hellenes.) Given its ancient popularity, I think this epithet deserves more modern attention.

But how do you honor a deity that has little or no direct connection to your everyday experience? For myself, I can’t say I have had much contact with sheep, beyond a couple childhood visits to a petting zoo. Yet this manifestation of my beloved God is strangely magnetic. He brings such values as simplicity, philanthropy and an unsettled life. Perhaps that is the place to start. And maybe visiting another petting zoo isn’t a bad idea.

The Visible Gods: Dawn, the Sun and Multiple Meanings

I watched the sun rise over a bank of clouds on the horizon while on my way to work a couple days ago. Watching the sun rise and the world stir and awaken to its light is a spiritual experience in and of itself. The birds sing for joy... Continue →